You can find on this page the map of London bike route and the map of London Santander Cycle Hire stations. The city of London has undertaken considerable efforts to develop the use of bicycles by creating miles of trails and bike paths, a system of bike sharing and also cycling routes to move easily in London.

London has made major investments to improve its cycling network. Numerous lanes have been added and the "Santander Cycles" self-service bicycle service has been introduced and expanded. The "Transport for London" website offers a lot of information for cyclists, please feel free to visit it.

Due to London's heavy traffic, it is essential to wear a helmet and we advise you to wear reflective clothing and make sure that the front and rear lights are working properly. 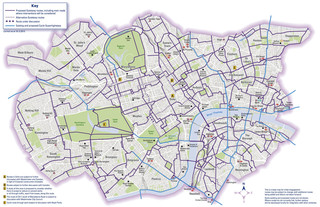 The London bike network is about 60 miles (97 km) thanks to a strong policy to develop the dedicated cycle path initiated by the city of London. Many dedicated lanes for cyclists have been built to facilitate coexistence with motorists. Bike routes were created to help people enjoy the city.

Here are some ideas for cycling routes in London:

You can find other cycle routes by looking at our London cycle route map. For your information, bicycles on public transport are only allowed if they are folding.