The metro train network serves Greater London and the surrounding areas of Essex, Hertfordshire and Buckinghamshire. It is commonly referred to as "Underground" although 55% of the network is above ground or "The Tube". The Metropolitan Railway is the first line, inaugurated on January 10, 18632, making it the oldest metropolitan network in the world. Many rail transport networks coexist in London. We are going to present them to you on this page as well as the various associated plans. 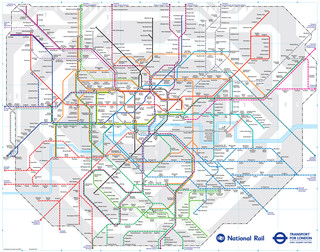 Its network includes the following 12 networks:

If you want to reach the city from East to West or North to South, the suburban train is the fastest means of transport. There are many stations and you will always find one not too far from your destination. 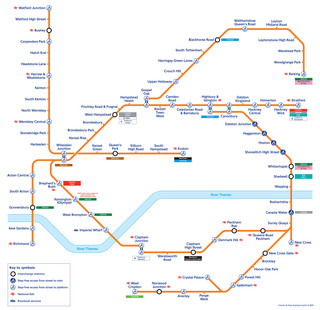 The London Overground which transports 124.6 million passengers per year, exists since 2007 and is operated by the TFL (Transport for London). Its network of 84 stations and 53 miles (86 km) includes 6 lines.

Fares are the same as for other means of transport. You can use your OysterCard on all London Overground lines within zones 1 and 9. The London Overground is connected to some underground and bus lines and is easily recognised by its orange colour on London transport maps.

The Docklands Light Railway (DLR) which transports 100 million passengers per year, exists since 1987 and is operated by the TFL (Transport for London).

The Docklands Light Railway is part of the Greater London public rail network. It is a network of mainly aerial (the view can be very beautiful) self-drive trains serving the East End of the city, including the docklands area along the Thames (Canary Wharf, Cutty Sark, Royal Greenwich observatory, Greenwich Market, Greenwich Park, Greenwich Meridian...).

All DLR lines are accessible to people with reduced mobility, DLR stations are equipped with lifts and the ramps to the platform are at the same level as the train.

The Crossrail, an urban & suburban train in construction, will open in 2015 and will be operated by the TFL (Transport for London).

The first line of the Crossrail is intended to link Reading Station, west of the British capital, to Shenfield Station on the left bank of the Thames, and Abbey Wood Station on the right bank of the river. 11 London Underground stations will be served: Ealing Broadway, Paddington, Liverpool Street, Whitechapel, Stratford, Canary Wharf or Custom House. 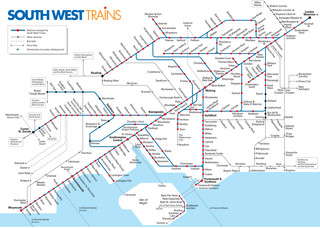 South West Trains was a British railway company that operated the South Western franchise between 1996 and 2017. 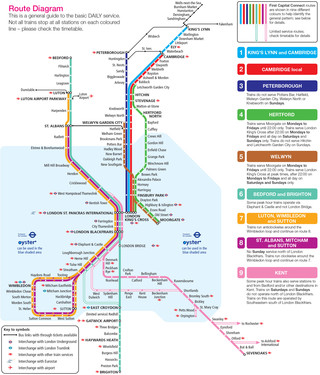 The First Capital Connect which transports 3.2 billion passengers per year, is the Thameslink Great Northern franchise since 2006 and is operated by First Group. 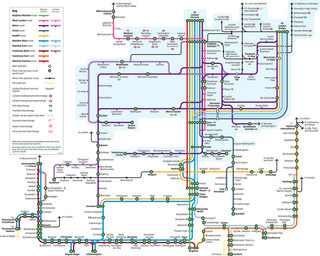 The Southern Railway is the Network SouthCentral franchise since 2009 and is operated by Govia (Go-Ahead and Keolis).

Its network of 179 stations includes the following 10 lines:

The Southern Railway network consists of commuter rail lines in South London and regional services extending into the southern counties.

All Southern Railway lines are south of the Thames, with the exception of the West London line which runs through London via Shepherd's Bush and up the West Coast main line to Milton Keynes.

Together with the Thameslink Railway and the Crossrail line, it is one of the few long-distance national lines to cross London instead of stopping at one of London's railway terminals. Southern lines that do not serve London include the West Coastway and East Coastway lines along the south coast of Sussex, Kent and Hampshire. 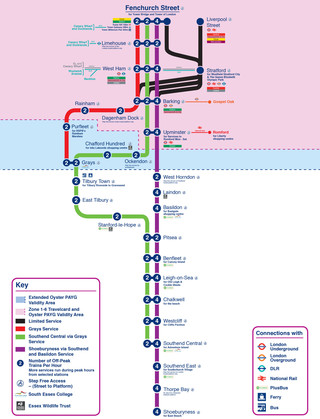 The C2C which transports 916 million passengers per year, is the Essex Thameside franchise since 1996 and is operated by National Express.

In May 1996 the company was established as LTS Rail. Its owner, Prism Rail, had obtained the London rail franchise, Tilbury & Southend, as part of the privatisation of British Rail. LTS Rail was renamed c2c in May 2000 and Prism Rail was acquired by National Express in the same year. National Express then sold c2c to the Italian operator Trenitalia in February 2017. 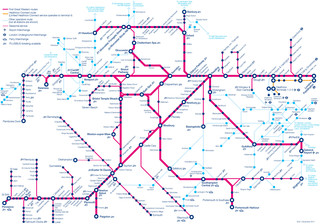 The First Great Western which transports 4.9 billion passengers per year, is the Great Western franchise since 1998 and is operated by First Group. Its network includes 208 stations and 1,322 miles (2 129 km). 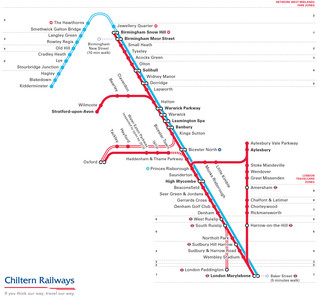 According to the Strategic Rail Authority, it is the 5th most punctual railway company. 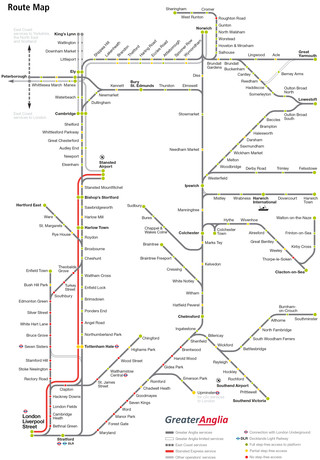 Greater Anglia operates the East Anglia franchise, providing the majority of commuter and regional train services from the central London terminus at Liverpool Street. The line serves Essex, Suffolk, Norfolk and parts of Hertfordshire and Cambridgeshire.

In May 2015, most of Greater Anglia's commuter trains were transferred to London Overground and TfL Rail. The franchise was re-tendered as East Anglia and awarded to Abellio in August 2016. In 2017, Abellio agreed to sell 40% of its shares to Mitsui. 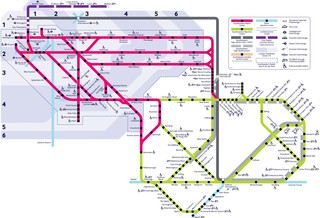 Its network of 179 stations includes the following 14 lines:

The Southeastern rail network consists of 540km and 179 stations. 70% of its services are to and from London.

Heathrow Connect was on the same line as the Heathrow Express but serving intermediate stations. This provided connections between West London towns, the airport and central London (Central London). Heathrow Connect is replaced in 2018 by the "Elizabeth line". (TfL Rail).