There is a transport service on the Thames in London: six boat or ferry lines cross the London River. The boat on the Thames is an opportunity to visit London in an original way.

A river shuttle service is also available to get around London. These shuttles take you from one corner of the city to the other via the Thames.

The Thames Clipper is a waterway company that allows you to travel on the Thames by boat. Its service runs from 6am to 1am and costs from £5 (one way) to £8 (return). Boarding is from Embankment to Woolwich Arsenal, passing the Tate Modern, Shakespeare Globe Theater, Tower Bridge, Canary Wharf, Greenwich and the O2. 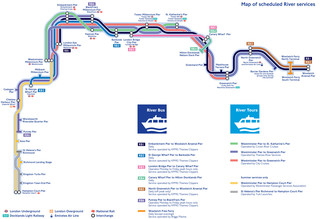 London River Buses exist since 1999 and are operated by TFL (Transport for London).

Its network includes the following 12 lines divided into River Bus and River Tour:

The River Bus is a means of public transport in London. River Bus allows you to avoid traffic jams with the bus or the crowds of the underground and to enjoy a very beautiful view of the city of London.

The River Bus are equipped with wifi and a cafeteria. Boat tickets can be paid in cash or with the capital's public transport card, the Oyster Card. With the Oyster Card, you will pay the minimum price of less than £6.

There are six boat lines on the Thames, as well as a ferry service that crosses the Thames from one side to the other.

The boat routes are called RB with their numbers 1 to 6. Boat lines RB3 and RB6 pass only once an hour.