You can find on this page the map of London tube. London subway, tube or underground is a transit system serving the city of London (United Kingdom) with the urban, suburban & commuter train, the tram, the bus, the nigth bus or the river bus. The tube network has 11 lines and 270 stations forming a rail network of 249 miles (402 km). 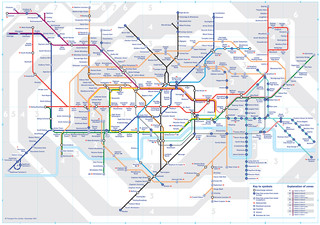 London tubes which transport 1.2 billion passengers per year, exist since 1863 and are operated by the TFL (Transport for London).

Its network includes the following 11 lines:

The London Underground is divided into 9 zones, with the first zone starting from the historic centre. Most tourist attractions are located in Zones 1 and 2 and Heathrow Airport is in Zone 6. Therefore, when you buy an Underground ticket, it is necessary to know the zones where your departure and arrival stops are located.

The London Underground runs from 5am to 00am. The service in central London runs until 1am. From 19 August 2016, some lines offer a night service and operate 24 hours a day. The service is called the "Night Tube".

The frequency of the metro is quite high, there are never more than two or three minutes of waiting time between two metros on the main network.

To take the subway, it is essential that you buy a card. All tickets can be bought either at ticket machines in metro stations or at a ticket office. The Oyster Card is the London Underground card. If you have a contactless payment card, you will not need to buy a ticket or travel card. Your bank card becomes your transport card and it works for the Bus, Tube, Tram, DLR, London Overground, London Cable Car and River Bus!